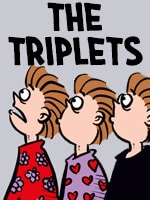 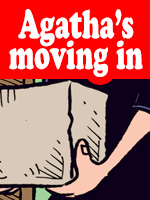 Moving Back In
More Chapters

There have been very few new strips here lately, and I have a PERFECTLY good explanation for this laziness.

I attended the Oslo Comics Expo to sell my newly released graphic novel INTERITUM, plus my fresh Norwegian Chez Cuckoo release, “Abducted!”. A story I hope I will have time to translate and release as an English eBook later this year. My graphic novel is also going to be translated into English and released as an Ebook, in the beginning of next year. I also hope to do a Kickstarter, to publish it in English print too. So, let’s see what I manage to do.

Going to a convention like this also lets me meet old friends and colleagues, chat, and drink beer with them. Mmmm, beeeer.

Anyway, I also went to Tons of Rock, a huge rock and metal festival in Oslo last weekend. That was a great experience, with … tons of music sun, and more beer. Hehe.

Well, I’m back in business now, so unless I get very sick, have an accident, or I’m abducted by aliens, expect two new strips from me every week this whole summer. At least until August when I will start moving to another place. More about that later. Cheers!

Okay, so... We have cookies! Yes, dark side stuff, I know. But this website uses cookies to improve your experience while you navigate through the website. Out of these, the cookies that are categorized as necessary are stored on your browser as they are essential for the working of basic functionalities of the website. I also use third-party cookies that help me analyze and understand how you use this website. These cookies will be stored in your browser only with your consent. You also have the option to opt-out of these cookies. But opting out of some of these cookies may affect your browsing experience. Read about my cookie policy here.
Necessary Always Enabled
Necessary cookies are absolutely essential for the website to function properly. This category only includes cookies that ensures basic functionalities and security features of the website. These cookies do not store any personal information.
Non-necessary
Any cookies that may not be particularly necessary for the website to function and is used specifically to collect user personal data via analytics, ads, other embedded contents are termed as non-necessary cookies. It is mandatory to procure user consent prior to running these cookies on your website.
Functional
Functional cookies help to perform certain functionalities like sharing the content of the website on social media platforms, collect feedbacks, and other third-party features.
Performance
Performance cookies are used to understand and analyze the key performance indexes of the website which helps in delivering a better user experience for the visitors.
Analytics
Analytical cookies are used to understand how visitors interact with the website. These cookies help provide information on metrics the number of visitors, bounce rate, traffic source, etc.
Advertisement
Advertisement cookies are used to provide visitors with relevant ads and marketing campaigns. These cookies track visitors across websites and collect information to provide customized ads.
Others
Other uncategorized cookies are those that are being analyzed and have not been classified into a category as yet.
SAVE & ACCEPT